The Northern Rivers Rail Trail Association Incorporated (NRRT Inc.) met last week. One item for discussion was an update on Mayor Simon Richardson’s Byron Line proposal.
NRRT Inc. are disappointed that Simon so quickly rejected our cooperation with the Byron Line. The minutes of the 25 August Council meeting show he voted against a motion to progress a partnership with Tweed Shire to extend their proposed trail to Billinudgel. He also voted against another motion to discuss the extension with Tweed Shire. This was contrary to his assurances to us that he supported our efforts towards a rail trail on the corridor. This short section of trail would make a big difference to Billinudgel and Simon’s actions are denying Byron residents and business owners the benefits of the trail.
When NRRT Inc. wrote to Simon to confirm our cooperation with the Byron Line, we noted we would continue to work towards a rail trail north of Billinudgel and west of Bangalow. This was consistent with the Mayor’s Byron Line from Bangalow to Billinudgel. His response was “I am in total agreement with all the points raised”.
We are at a loss to understand how, given this assurance to us, the Mayor could use his vote and position in Council to influence efforts to build a rail trail north of Billinudgel.
Simon’s actions have given us no choice but to withdraw our cooperation with the Byron Line proposal. NRRT Inc. fear the Byron Line proposal will result in sale of the corridor to private interests. It has no funding source and no current proponent. The necessary business case and feasibility study will take years to complete with little likelihood of producing any viable use other than a rail trail. We remain keen to work with any good-faith proposals for multi-use of the rail corridor. Consider soft wheeled vehicles like the Botanical Gardens Choo Choo Train!
The benefits of the rail trail to our Shire and the region are too important to be used as a political tool.

Northern Rivers Rail Trail Association (NRRT) has recently met to carefully consider Mayor Simon Richardson’s Billinudgel to Bangalow combined tourist train and bike trail proposal.
The Mayor plans to put trains back on the tracks, yet the 2015 Government sponsored Northern Rivers Rail Trail feasibility study, which considered a variety of multi-modal uses for the rail corridor, clearly shows this is unachievable. The study found that track based uses were extremely limited due to the very poor condition of the one way tracks and bridges. The reinstatement of a rail service requires an exorbitant level of funding.
In contrast, the study found an unbroken rail trail in the corridor (no tracks) achieved a cost benefit ratio well above the Government threshold for public funding. A rail trail would keep the entire corridor in the hands of a Public Trust for the free use of locals. Removal of the rotting overgrown tracks will provide safe access between and within communities along the corridor, and open the way for soft wheeled electric vehicles to share the trail in some sections.
Tweed Shire Council has recently completed a detailed engineering study of their 23 kms of track and found that only a rail trail can feasibly preserve the corridor in public hands. Tweed Council is anxiously awaiting a funding announcement which could see their rail trail a reality in 2017. This will be one of the most beautiful rail trails in the world, and will attract thousands of nature loving visitors each year.
At the Council meeting on 25th August Mayor Simon Richardson emphatically rejected an offer by Tweed Council to terminate their rail trail at Billinudgel (at no cost to Byron Council). Despite approval from the Billinudgel Hotel, huge economic benefits for the village, appeals from NRRT member Councillor Sol Ibrahim, and the proposal’s green credentials, the Mayor argued that no partnership should be considered until another yet another feasibility study is completed. The mayor would like this further study (costing between $200,000 – $300,000) to determine if a private or commercial train could operate between the Queensland border to Billinudgel and beyond. It is unclear who will provide the support and funding for this additional study, and members of the NRRT are alarmed by the claims made in the mayor’s speech that ‘false hope’ was better than ‘no hope’.
NRRT is concerned that the Mayor’s proposal will only serve to further delay the public use of the corridor. The Mayor’s proposal has no funding source for an additional feasibility study and no proponent to operate any self-funding track based service. NRRT believes that sections of the corridor will be sold off unless incorporated into a continuous rail trail. Lismore and Richmond Valley Councils are already working towards a rail trail in their section of the corridor. NRRT and its thousands of supporters are convinced that a viable public rail transport system is many years away. It is likely to be constructed in a new two-way corridor that connects the major population, employment and education centres of Northern NSW, leaving the current corridor to degrade even further if it is left unused. NRRT calls on the whole community and Councillors to unequivocally support the Rail Trail now before it is too late. Use it or lose it!

We can’t waste any more time

BESPOKED PARTY FOR ALL CYCLISTS (AND THEIR FRIENDS)
Byron Bay Cycling Club had the idea that we should celebrate cycling in the region (there are a lot of us!)
The new councillors will also be invited as well as guest speakers. As you can see, we have our supportive band Soul’d performing for us again so it should be a great night with good food, music and dancing. Come along and have a ball!
We also need to point out to the 4 councils that more needs to be done to create safe cycling infrastructure for our residents and visitors.
Please ring the Byron Bay RSL Club to reserve tickets if you are unable to go to any of the venues to buy them. 02- 66856878 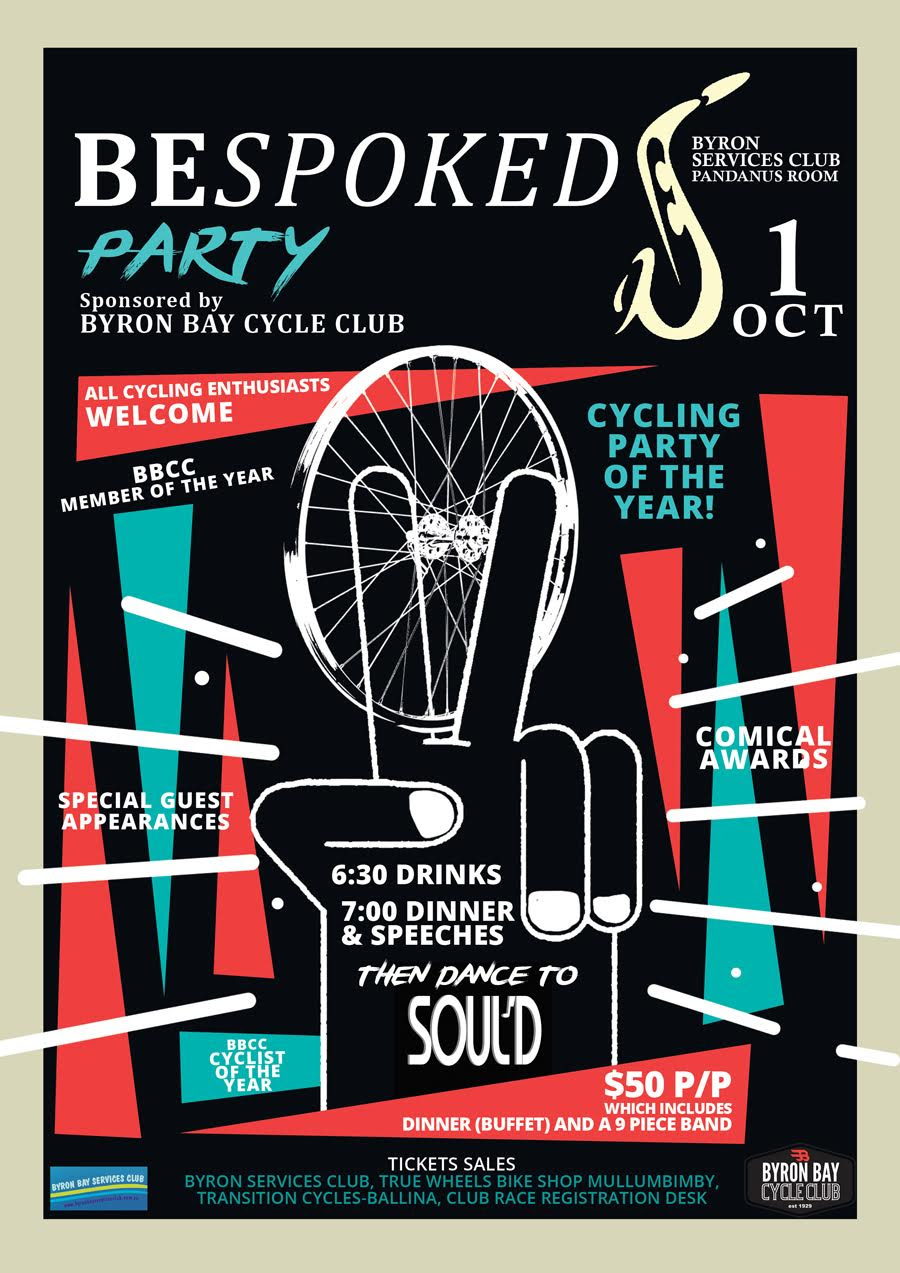